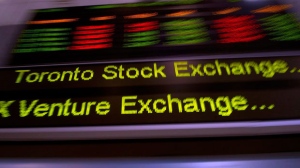 The positive movement started after Moderna Inc. indicated that its experimental vaccine produced high levels of antibodies in a small study, sparking hopes for a large-scale vaccine program. It's just the latest positive test results as researchers around the world rush to find a treatment for the deadly virus that has claimed 580,000 lives, including 8,810 in Canada.

While some experts worry that fast vaccine timelines are unrealistic, a vaccine by the fall with mass inoculations early next year could ease investor concerns, said Allan Small, senior investment adviser at HollisWealth.

“If we know that there's a life for this virus of only the next five months and then everything should be in the rearview mirror after that, I think that's a pretty powerful thing going forward,” he said.

The vaccine news was followed by “blowout” quarterly results from Goldman Sachs, the latest U.S. bank to report good results on strong trading activity despite higher provisions for loan losses.

“Today is one of those positive days where everybody's focusing on the ups instead of the negativity,” said Small.

He said the overall performance of banks supports the idea of the economy bouncing back even though July may be soft because of rising infections that prompted some states to restrict community activities.

“The banks are telling us that the economy is definitely getting better, stronger,” he said, noting people are getting back to work.

The Canadian dollar traded for 73.89 cents US compared with 73.44 cents US on Tuesday after the Bank of Canada's announcement it would keep its key interest rate on hold.

Materials was the lone sector on the TSX to fall in a broad-based rally led by health care, consumer discretionary and energy.

Health care rose 5.1 per cent as cannabis producers Cronos Group Inc. surged 9.1 per cent and Aphria Inc. was up 7.7 per cent.

Energy increased more than two per cent on higher crude prices as U.S. oil reserves were down amid talk from OPEC about easing on the production cuts amid increasing global demand.

Vermilion Energy Inc. rose 7.2 per cent while Whitecap Resources Inc., MEG Energy Corp. and Cenovus Energy Inc. each climbed by about 4.4 per cent.

The industrial sector was helped by Air Canada shares soaring 13.8 per cent on increased investor sentiment caused by vaccine hopes. The trend also helped cruise lines and the airline industry as a whole, said Small.

“If some of these airlines can hang on, can survive, don't go bankrupt, can maintain their business, imagine when (there's) a vaccine... I've got to believe these airlines are going to go significantly higher, just on speculation alone.”

This report by The Canadian Press was first published July 15, 2020.