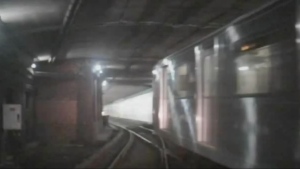 Two TTC subway trains narrowly avoid a collision in this still image from video captured from the front of the one train on June 12, 2020.

The TTC board is expected to approve a new policy today that would require that all near-misses on the subway system be immediately disclosed amid criticism over one such incident that was kept from the public for nearly a year.

The near-miss happened on Line 1 between Osgoode and St. Andrew stations just after midnight on June 12, 2020 but only came to light earlier this month following a report in the Toronto Star.

The Star has said that a southbound train had just switched onto the northbound tracks to provide supplementary service following a medical emergency on another train.

The train, which didn’t have any passengers at the time, was about to merge onto the main track when a guard positioned at its rear spotted an incoming train approaching from behind and was able to get the operator to slam on the brakes just in time to avert a collision.

Following the incident the TTC launched a full internal investigation that eventually led to 31 corrective actions being taken, including disciplinary action against some of the employees involved that is now being challenged by their union.

But it never disclosed the incident to the public until it was reported on earlier this month.

In an interview with CP24 on Wednesday morning, Mayor John Tory said that there needs to be an “absolutely ironclad policy” requiring that similar incidents be disclosed to the public.

Tory said that he spoke with TTC CEO Rick Leary about the need for such a policy on Tuesday and expects one to be “formalized” by the board during a meeting scheduled for this afternoon.

“I’m told that when it actually was sort of found out by the TTC that no one had ever told the commission and therefore the public had never been told they were actually quite shocked that was the case but that I think that comes from a lack of an absolutely ironclad policy,” Tory said.

The TTC has said that it did intend to make the incident public once it provided its full report to the board this coming fall.

Tory, however, said that details need to be released sooner when “extremely rare” incidents like the one on Line 1 occur given the impact that keeping them under wraps could have on public confidence.

“The bottom line is the public should have known just so that they know what's going on and nobody's trying to, you know, hide anything and I don't think anybody was. I think it was just there was no policy that said ‘by the third day, the third hour after one of these things happened the public are going to know’ and that's the way it should be,” he said.

Toronto has not had a serious collision on its subway system since the 1995 Russell Hill disaster on Line 1, which claimed the lives of three people and injured 30 others.

The new $737 million automated signal system currently being installed is expected to further reduce the likelihood of collision, though it should be pointed out that the near-miss last June involved a train that had to switch into manual mode in order to navigate a narrow set of tracks connecting the northbound and southbound tunnels.