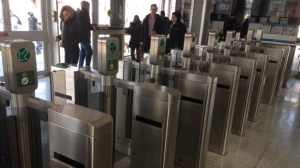 The TTC has suspended the installation of new fare gates at its stations amid ongoing mechanical troubles with the devices.

The new fare gates started rolling out at some stations in 2016, but were expanded to a number of other stations last year.

While problems were noticed with some of the first gates, the TTC said that it wasn’t until more gates had been installed that they were able to determine that it was a systemic problem.

TTC spokesperson Stuart Green told CP24 Friday that there are several problems, but the primary issue is with the motors on the gate paddles.

Green said about 2,000 motors need to be replaced for the 1,000 gates that have already been installed or have yet to be installed.

In addition, there is a software problem affecting the operation of the gates, the TTC said.

“All of that needs to be looked at and we’re working with our contractor to get those issues resolved,” Green said. “Once those issues are resolved we’ll continue installation and we’ll complete the job as we need to.”

The new gates are PRESTO-enabled and have two paddles that swing open to allow customers to pass through. They replace the old metal turnstiles that worked with tokens and metropasses.

While the problem will delay the installation schedule for the new gates, Green said the TTC will not be on the hook for the additional cost to fix them.

“This is entirely with our contractor, so there’s no cost to the TTC. It’s within the service contract that we have with them,” Green said.

However he said the real problem is the inconvenience to customers.

Fare gates that have already been installed will remain in place and will be fixed where they are.

Green said that a technician for the fare gates will be on-hand at Union Station – the TTC’s busiest station – to make sure that problems can be fixed quickly so that riders can continue to move through the station smoothly.

“It’s the inconvenience to our customers that is really the issue,” Green said. “That’s what we want to address before we continue.”