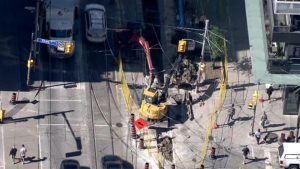 An intersection in downtown Toronto will be closed for more than a month as crews replace streetcar tracks. (Chopper 24)

An intersection in the city’s King West Village neighbourhood will be fully closed starting next week due to some work, including TTC streetcar track replacement.

In a news release Friday, the city advised that the intersection of King Street West and Shaw Street will be shut down from traffic beginning Oct. 4 as part of a construction project to renew streetcar tracks, resurface the road and replace a 146-year-old watermain.

The city said work at the intersection is expected to last until mid-November.

“This project, in coordination with TTC, has bundled together the construction needs around the King Street West and Shaw Street intersection into one project, to complete the work as quickly as possible and minimize prolonged disruption to the area,” the city said in a statement.

Motorists are advised to use Douro Street for east-west travel and Strachan Avenue for north-south travel as detour options.

“The city recognizes the disruption caused by construction and thanks everyone for their patience as we work to renew this critical infrastructure.”