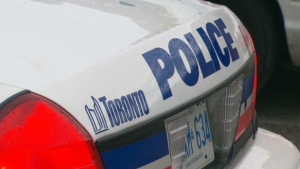 Police say they received multiple calls about gunfire between two vehicles in the area of Lawrence and Warden avenues at around midnight.

Officers responded to the scene and later located one of the suspect vehicles nearby.

A gun, police say, was found inside the car and two people were subsequently arrested

No injuries were reported.Police say they are still searching for the other vehicle believed to be involved in the incident.