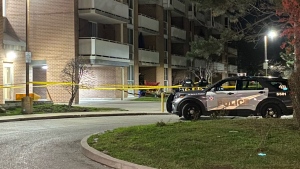 Toronto police are investigating after one person was fatally stabbed at 1275 Danforth Ave. on Dec. 6. CREDIT: MIKE NGUYEN

Toronto police have laid a murder charge against a suspect and have also charged another person with accessory in connection with the fatal stabbing of a 57-year-old man in the Danforth area earlier this week.

Officers were called to a Toronto Community Housing building on Danforth Avenue, near Greenwood Avenue, at around 2:30 a.m. on Dec. 6.

A victim was found with stab wounds and was rushed to the hospital where he later died of his injuries.

Police have since identified him as 57-year-old Nicola Maioreno of Toronto.

Investigators announced charges in connection with his death on Friday.

They said that 30-year-old Dylan Shrief of Toronto was arrested Thursday and has since been charged with second-degree murder.

Donivan Comeau, 23, of Toronto, was also arrested on Thursday and is facing one charge of accessory after the fact to murder.

Both men are scheduled to make an appearance in court Friday morning.

Police continue to ask anyone with information to reach out to investigators or to call Crime Stoppers anonymously.

Toronto police are investigating after one person was fatally stabbed at 1275 Danforth Ave. on Dec. 6. CREDIT: MIKE NGUYEN