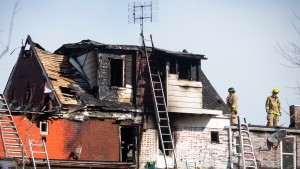 Members of the Fire Department inspect the ruins of a house after it was destroyed by a fire in Oshawa, Ontario on Monday March 22, 2021. THE CANADIAN PRESS/Chris Young

Two people have been found dead at the scene of a fire that tore through a stretch of row homes in Oshawa this morning while two other people remain unaccounted for.

“We have located two deceased individuals,” Oshawa Fire Chief Derrick Clark told reporters Monday evening. “At this time we are working with the coroner (and) Durham Regional Police.”

Clark said the two bodies were found after a Toronto Fire sent a specialized team in to help search the home, which sustained severe structural damage.

Officials have not publicly identified the remains.

Sometime after 1 a.m., Oshawa Fire Services was called to a stretch of homes on Olive Avenue, between Simcoe and Ritson roads, for a report of a fire.

They arrived to find a row house at 149 Olive Avenue engulfed in flames.

Fire crews pulled five people from the home and all were taken to hospital.

Four have since been released but one person remains hospitalized receiving treatment.

Oshawa Fire Services told CP24 that three of the five people were initially in serious condition, including a ten-year-old child.

Clark said later that those removed from the home suffered injuries that ranged from smoke inhalation to burns and cuts.

He said the blaze was “very difficult for our crews” and that damage to the three-storey home was “extensive.”

For much of the day, crews were unable to locate another four people believed to have been in the home at the time the fire started.

“We’ve got four residents unaccounted for and at this time it doesn’t look like it’s going to have a positive end,” Clark said earlier.

At around 6:30 p.m., he confirmed that two bodies had been found.

He said Monday was the “worst day for firefighters” and others responding to the blaze.

Neighbours told CP24 that a grandfather, his adult daughter and her husband, and at least three children lived in the home.

Clark said a total of seven properties were impacted by the fire, and eight residents have been given temporary lodging in a nearby hotel.

“This is going to be a very long and difficult scene,” he said.

Clark and the Ontario Fire Marshal said the investigation into what caused the fire had begun, but was hampered by the brittle and unsafe nature of the structure due to the fire.

He said “floors have collapsed down on each other,” making it extremely difficult to search the wreckage.

“Part of the reason why we have asked for assistance from our colleagues in Toronto is they're very well trained in structural collapse, beyond our capabilities,” he said. “So, we will be returning in the morning, and we'll be looking at the next phase of this operation, and how we can safely continue our investigation.

“Again, safety is paramount to not only our crews with fire crews and police on scene. We've had very limited access so far – a little bit on the upper floors and a little bit on the lower floor. We have substantial collapse on the second and third floors.”

Clark said the homes are around 100 years old and some of them have undergone partial rennovations.

“A lot of these units have had construction and remodeling and so on,” he said. “Very difficult fires to stop because the attics are all adjoining, and they're all common attic. I just want to touch upon the job that the fire crews did here today. It’s nothing less than extraordinary, to keep this fire to that one unit to limit the damage as they did.”

Durham police are also investigating the fire, with forensics officers at the scene.