Two in custody after gunfire investigation in Mississauga 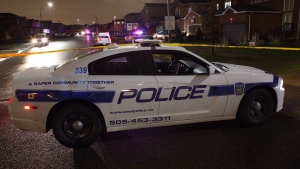 A Peel police cruiser is seen in this undated file photograph. (CP24/Tom Podolec)

Two people were taken into custody after shots were fired in Mississauga Tuesday night.

Peel police were called to the area of Hurontario and Dundas streets just before 9 p.m. for a weapons call.

There was a heavy police presence in the area as officers tried to locate an outstanding party.

Two people were eventually taken into custody in connection with a “shots fired” investigation, police said. .

There is no word so far on any possible charges.