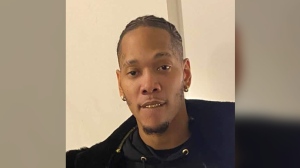 Matthew Parris-Cassidy, 32, of London, is wanted in connection with a human trafficking investigation.

Three men – one of whom is currently outstanding – are each facing a slew of charges in connection with a human trafficking investigation involving a woman from Durham Region.

According to investigators from London Police Services’ (LPS) Human Trafficking Unit, a Whitby woman started communicating with a man over social media last May and agreed to meet with him at a mall in Scarborough.

Police said following the meeting, the man offered to drive the woman home, but instead kidnapped her.

“When the woman realized that they were not heading towards her home, the man showed her a gun. The male made threats towards the woman if she did not comply with his demands,” they said.

Investigators allege between June 5 and June 18, the suspect ordered the victim to attend various locations outside the city of London where she was sexually assaulted on multiple occasions. He continued to make threats towards her, LPS said.

On June 18, the woman was then reportedly brought to London, where she was forced to perform sexual acts for money in various locations within the city.

At that point, the man reportedly introduced her to two other men, who also sexually assaulted her and forced her to perform sexual acts for money, police said.

London police said on June 26 the victim was able to escape from the situation and contact them for help.

As a result of this investigation, Justin Steven Adams, 35, and Matthew Parris-Cassidy, 32, both of London, along with 37-year-old Jonathan Drummond, of no fixed address, have been charged with trafficking in persons by recruiting/exercising control, forcible confinement, and extortion among others.

The accused are also each facing a number of additional related charges.

Adams was arrested and remains in custody. He is expected to re-appear in court on August 18.

Following a tip from a member of the public, Drummond was arrested Wednesday afternoon. he is currently in custody and is scheduled to appear in London court later today in relation to his charges.

Parris-Cassidy has not been located at this point. Charges against him have been laid by way of warrant of arrest, police said.

Investigators believe there may be other victims and encourage them to contact police.

Anyone who suspects someone of being a victim of human trafficking, or anyone who has information about the whereabouts of theses two wanted men, should contact London police at (519) 661-5670, or Crime Stoppers anonymously at 1-800-222-8477 (TIPS) or https://londoncrimestoppers.com/.