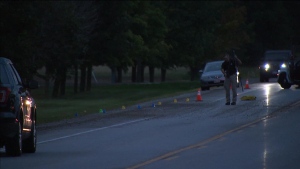 A damaged vehicle is seen off of Warden Avenue in Whitchurch-Stouffville after a crash on Aug. 15, 2019. (CP24)

Two men are dead after their car struck a tree in Whitchurch-Stouffville on Thursday evening.

York Regional Police say they were called to Warden Avenue, between 19th Avenue and Stouffville Road at 5:30 p.m. for a report of a collision.

They arrived to find a vehicle lodged into a tree. Emergency crews worked to free the occupants, who were trapped inside the wreck at first.

Staff Sergeant Blair Steer said homeowners in the area heard a loud bang but none witnessed the car strike the tree.

Major collision bureau investigators are working to determine what caused the collision.

Warden Avenue near the collision was closed in both directions to allow for an investigation.

A damaged vehicle is seen off of Warden Avenue in Whitchurch-Stouffville after a crash on Aug. 15, 2019. (CP24)