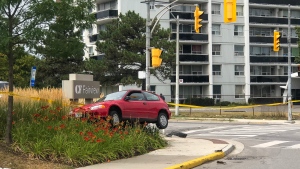 Two pedestrians have been taken to hospital with serious injuries after being struck by a vehicle near a shopping mall in North York on Saturday afternoon.

It happened at Fairview Mall Drive and Godstone Road, which is at one of the entrances to the parking lot at CF Fairview Mall

Police say that the driver of the vehicle remained on scene and is cooperating with their investigation.

The victims, a man and a woman, were both transported to trauma centre via ambulance, paramedics say.