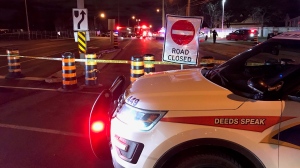 Two male pedestrians were struck by a vehicle on Highway 7 in Vaughan. (CP24/Simon Sheehan)

Two men are in critical condition after they were struck by a vehicle in Vaughan Saturday evening.

Duty Insp. Andrew Bell said the pedestrians were crossing the highway when they were struck.

He said the male victims, a 49-year-old and a 25-year-old, were transported to a Toronto trauma centre with life-threatening injuries.

The driver of the vehicle remained on the scene, police said.

Bell noted that they don’t have any information at this time that suggests alcohol or speed played a factor in the crash.

Police have closed Highway 7 between Islington Avenue and Martin Grove Road as they investigate.

Two male pedestrians were struck by a vehicle on Highway 7 in Vaughan. (CP24/Simon Sheehan)