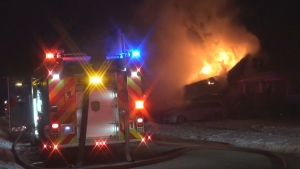 Two people are dead after being pulled from a house fire in Peterborough.

Emergency crews were called to a home on Gillespie Avenue around 2 a.m. and found heavy smoke and visible flames upon arrival.

Peterborough police said a 65-year-old man and a 69-year-old woman were pulled from the house by firefighters.

They were later pronounced dead. Police cannot confirm the relationship between the two victims.

Police said they are working with Peterborough Fire Services and the Office of the Fire Marshal to determine the cause of the fire.