Two people dead, another injured after two-vehicle collision in Vaughan 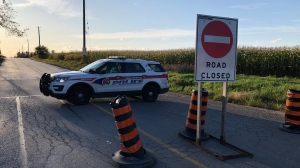 Emergency crews were called to the area of King Vaughan Road and Pine Valley Drive, around 2:45 p.m. for reports of a crash.

York paramedics said one person was pronounced dead at the scene. They transported two others in hospital.

Police said a second person has died while another remains in hospital in non-life-threatening condition.

Police closed King Vaughan Road between Pine Valley Drive and Weston Road for investigation but it has since reopened.