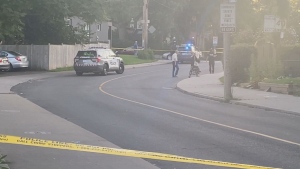 Police are investigating after shots fired in the east end.

Two people have been arrested after shots were fired in the city's east end Friday evening.

Toronto police say they received calls for the sound of gunshots in the area of Gerrard Street East and Coxwell Avenue.

When officers arrived, they became involved in a foot pursuit with two suspects.

Police say the suspects were later caught and taken into custody. In addition, they also recovered a firearm.

At the scene, no victims were located, but multiple shell casings were found.

Earlier in the evening, police also responded to shots fired near York University.

There were no victims in the incident, but police say several shell casings were located.

Police are investigating after shots fired in the east end.