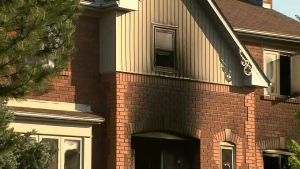 A home on Holbrook Road in Mississauga that was the site of a two-alarm blaze on Friday morning is shown.

Two people were taken to hospital with suspected smoke inhalation after a fire at a Mississauga home on Friday morning.

Crews were called to the residence on Holbrook Road near Erin Mills Parkway and Thomas Street at around 5:30 a.m.

Platoon Chief Daniel Boyer tells CP24 that firefighters encountered a “substantial” blaze on the main floor of the home upon arrival.

He said that they “aggressively worked to extinguish the fire” and were able to quickly knock it down.

The two people who were taken to hospital are believed to be in stable condition, according to paramedics.