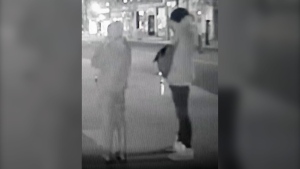 Police are looking for these two suspects who allegedly stole a television from a building in the east end. (Toronto Police Service)

Toronto police have released a photo of two suspects who allegedly stole a television from a building in the east end.

On Thursday morning, the suspects broke into a building in the area of Main Street and Gerrard Street East, police said, and took a large flat-screen TV.

In addition to the photo, police have released descriptions of the two suspects, asking for the public’s help identifying them.

The first suspect is described as a white male, six-foot-tall with a slim build. He was last seen wearing a dark-coloured toque, light-coloured hooded sweater, dark-coloured pants, white running shoes, and a cross-body bag with reflective stripes.

The other suspect is described as a white female, five-foot-six, with a slim build and long blonde hair. She was last seen wearing a light-coloured toque, a light-coloured hooded sweater, shorts and sandals.