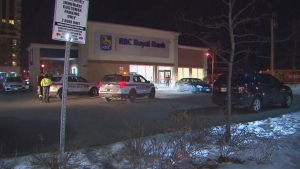 Two teens who police allege were involved in a violent bank robbery in Markham on Wednesday night have now been charged in connection with another attempted robbery at a financial institution in Pickering.

Durham Regional Police say the incident occurred at a Scotiabank on Kingston Road at around 8 p.m. on Valentine's Day.

According to police, the suspects entered the bank armed with guns and demanded cash. The teens, police allege, pistol whipped two employees and injured a third during the incident.

They fled the bank without obtaining any cash and the three victims were treated in hospital for facial injuries.

The two suspects, ages 15 and 16, are now facing several new charges, including robbery with a firearm, wearing a disguise with intent, and three counts of assault causing bodily harm.

They were apprehended following a bank robbery in Markham on Wednesday night, Durham police confirmed.

Surveillance video of the Markham incident obtained by CP24 shows three suspects exiting a dark-coloured vehicle and entering the bank, located near 16th Avenue and Markham Road, shortly after 8 p.m.

Police allege that once inside, the suspects, who were armed with knives and a gun, told everyone to get on the ground and then demanded cash.

Two bank employees were stabbed during the robbery and two others sustained head injuries after being kicked in the face, according to police.

Investigators say the suspects fled to a nearby house that was under construction.

York Regional Police say they managed to track down the suspects and they were later taken into custody without incident.

The two teens, as well as a 13-year-old boy, were charged with a number of offences related to that incident.

They cannot be identified under the provisions of the Youth Criminal Justice Act.

York Regional Police said Thursday that the suspects involved in the Markham robbery are believed to be linked to other robberies throughout the GTA.

Police are continuing to investigate and are asking anyone with additional information to contact investigators or Crime Stoppers anonymously.