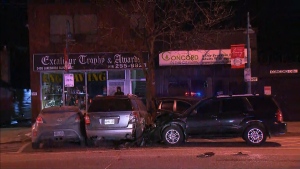 Two women have been taken to hospital with serious injuries – including a pedestrian – after a multi-vehicle collision in Etobicoke’s Long Branch area.

It happened at Lake Shore Boulevard West and Twenty Ninth Street at around 8:30 p.m.

A female pedestrian in her 30s and a female driver were both taken to hospital with serious injuries, police said.

Toronto Paramedic Services said none of the injuries are believed to be life-threatening.