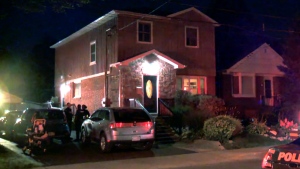 Two women suffered severe burns after patio furniture caught fire in the backyard of a Scarborough home on Thursday night.

Toronto Fire Services said the incident occurred shortly before 10 p.m. at a house on Park Street, near Kennedy Road.

According to officials, patio furniture ignited near a backyard campfire and two people, identified by paramedics as two women in their 50s, sustained severe burns to their upper body.

One other victim was taken to hospital with minor injuries and a fourth person was assessed on scene.

A spokesperson for Toronto Fire said one of the victims jumped into a pool following the incident.

The fire is not currently active and never spread to the home.

Insp. Jim Gotell said a fire investigator is on scene and the Office of the Fire Marshal will be investigating the circumstances surrounding the incident.

Gwendolene Snels and Scott Boushel, who live near the home where the fire occurred, told CP24 that they were sitting on their porch when they heard screams.

“I just thought it was people joking around,” Snels said. “I heard someone say, ‘Call 911,’ so I started running as fast as I possibly could.”

Boushel said he went into the backyard of the home and saw “huge flames.”

He said there were approximately 10 people in the backyard and some had suffered serious burns.

One woman had jumped into a pool to extinguish the flames, he added.

“The first two that came out, their lives are going to be changed forever,” Snels said of the injuries. “I’m still in shock. It is completely unbelievable.”