U.S. secretary of state to meet with Trudeau, Freeland ahead of G7 summit 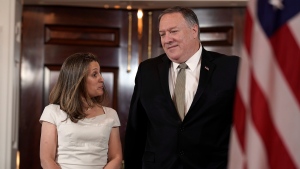 Their meeting comes in advance of the G7 summit of the world's seven big economies, which gets underway later this week in Biarritz, France.

Freeland's office says she will host the meetings Thursday in Ottawa, where discussions will focus on Canada-U.S. co-operation on various domestic and international issues, including key security and foreign policy matters.

The meeting is being billed as an opportunity to build on the outcomes of Trudeau's June visit to Washington, D.C., where he met with U.S. President Donald Trump and discussed relations with China, as well as the continued arbitrary detention of Canadians Michael Spavor and Michael Kovrig.

Trudeau spoke with Trump by telephone on Friday, where the Canadian detentions in China came up again, as did the ongoing unrest in Hong Kong and the shared support of the two leaders for the ratification of the new North American trade deal.

Trump and Trudeau also discussed challenges in the global economy, with an expectation they would further those discussions together in person at the G7 summit later this week.