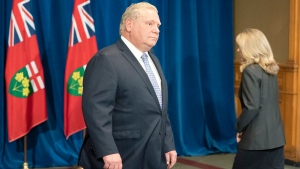 Ontario Premier Doug Ford walks to the podium as Minister of Long Term Care Merrilee Fullerton walks back to her spot during the daily briefing at Queenâ€™s Park in Toronto on Thursday May 28, 2020. THE CANADIAN PRESS/Frank Gunn

Premier Doug Ford said Thursday he’s been “taking bullets” for unionized inspectors who he says refused to enter long-term care homes that have been hit hard by COVID-19.

He said some inspections were done by phone in April, when Ontario saw the peak of the pandemic, because inspectors were afraid of contracting the virus.

“I’ve been taking bullets every day for the union. When I’ve been asked if they were doing telephone calls for inspections, well, the truth of the matter is they were refusing to go into these homes,” Ford said during his daily COVID-19 briefing.

“They aren’t medical professionals, so I understand it,” he said. “But, I’m not going to continue taking bullets for something that there was no control that we had when the unions refused to go in.”

Ford said the refusal of some inspectors to enter LTC homes is one of the reasons why his government decided to call in the military in April.

The premier did say that inspectors are now back in long-term care homes, thanks to the leadership of Ontario Public Service Employees Union President Smokey Thomas.

Speaking to CP24 on Thursday afternoon, Thomas fired back, saying inspectors went to the long-term care homes that they were told to go.

“They can’t just go do what they want, like management give them directions, management issue their workload for the day,” Thomas said. “They went even with putting their own health at risk.”

“They are just beside themselves today that the premier said what he said today. He’s not taking a bullet for the workers. We helped him dodge a huge bullet.”

In a letter written in April that was made public by the premier’s office, Thomas wrote that inspectors are “over-worked and frustrated,” but they remain committed to their obligation.

“Thankfully, much, if not all, of the inspection work happening now is being done by phone, providing a measure of safety for inspectors, long-term care home staff, and residents. But we now understand that your government wants to have in-person inspections,” Thomas wrote.

“Thanks to the low staffing levels and the inherent risks to multiple parties from such inspections, this plan is not only ill-advised but not necessary. In-person inspections will not provide us with any more information than we already have.”

He then wrote than residents at long-term care homes are not receiving the care they needed, and private long-term care facilities “never had a plan for this level of illness within their facilities.”

“This Ministry of Long-Term Care needs to listen to the front line. It has no plans to keep inspectors safe,” Thomas wrote.

“The government must send long-term care homes the proper medical infrastructure to help them cope and recover – people, unlike inspectors, who have the ability to help on-site. Provide more support staff, move patients who are mobile, cut agency staff who work at multiple homes. What’s needed now is a plan. What’s needed now is action.”

Thomas said the real problem is there are only 164 inspectors to cover some 626 long-term care homes across the province.

He said a “group of bureaucrats” are trying to cover the years of inaction on the issues that long-term care homes are facing.

“Once again, it’s a management failure that somehow they’re trying to scapegoat the workforce for,” he said.

Ontario Premier Doug Ford walks to the podium as Minister of Long Term Care Merrilee Fullerton walks back to her spot during the daily briefing at Queenâ€™s Park in Toronto on Thursday May 28, 2020. THE CANADIAN PRESS/Frank Gunn