Union says forced ratification vote is 'shameful,' calls on York U to return to table 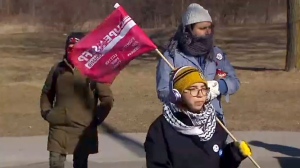 The union representing striking contract professors at York is condemning the university over its decision to force a ratification vote, calling it a “shameful abdication” of their responsibility to bargain.

"Our members have been on strike for nearly a month. Our bargaining team has repeatedly called on York University to come back to the table, to little or no avail,” Devin Lefebvre, chairperson of the Canadian Union of Public Employees Local 3903, said in a news release issued Tuesday.

“For York to now demand a forced ratification vote is a shameful abdication of their responsibility to sit down and negotiate.”

On Tuesday, the university announced that it has now asked the Ministry of Labour to supervise a ratification vote on the offer tabled on March 20.

“Our 50,000 undergraduate students want to get back to finish the school year so they can keep their plans – graduation, summer jobs, family responsibilities, and travel for those going home or abroad,” a statement posted on the university’s website read.

“About 25 per cent of the total membership in the three CUPE 3903 units voted on the offer we presented on March 1. With the stakes so high, we feel it is important that every member now has the opportunity to cast their ballot.”

But Lefebvre said the union’s bargaining team and leadership will tell members to reject the offer.

"The offer members will vote on is not substantially changed from the offer members rejected nearly a month ago, and fails to address the key issues all three units have raised. We would ourselves be abdicating our responsibilities if we were to recommend ratification of a bad deal," he said in the release.

He encouraged the university to return to the bargaining table.

The strike began on March 5 after the two sides failed to negotiate a deal. The union, which represents about 3,000 workers, has previously said that the main sticking points are job security for part-time workers and the path to full-time tenured employment for contract faculty.

The university said its offer for each of the three bargaining units include “substantial increases” in benefits and “market leading” wage increases of 2.1 per cent, 2.2 per cent, and 2.3 per cent.

The university said it typically takes eight to 10 days from the time the request to the Ministry of Labour is received to conduct a vote.