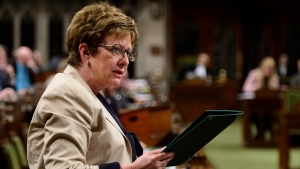 Conservative MP Diane Finley stands during question period in the House of Commons on Parliament Hill in Ottawa on Thursday, May 10, 2018. THE CANADIAN PRESS/Sean Kilpatrick

OTTAWA - Longtime Conservative MP Diane Finley has resigned her seat in the House of Commons.

Finley announced last summer that she would not seek re-election.

She told the Commons today that she is resigning, effective immediately.

Finley has represented the Ontario riding of Haldimand-Norfolk since 2004.

In Opposition, she was also the liaison between MPs and the national party.