Victim in East Gwillimbury hit-and-run had been reported missing after leaving residence for a walk, police say 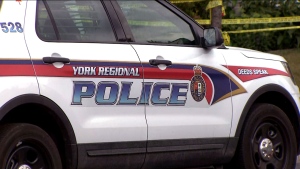 Police are appealing for information after a 70-year-old man was found deceased on a roadway in East Gwillimbury on Wednesday following an apparent hit-and run.

Police say that the victim left his residence near Davis Drive and Kennedy Road for a walk at around 9 p.m. on Tuesday night and wasn’t heard from again.

His body was then found on Davis Drive between Bales Road and Warden Avenue at around noon on Wednesday.

Police say that investigators are currently looking to identify a male wearing reflective clothing who is believed to have stopped in the immediate area of the scene in a green Toyota Corolla.

They are also appealing to anyone with dashcam footage to come forward.