Victim of hit-and-run crash on Hwy. 410 says he was 'very lucky' he wasn't injured 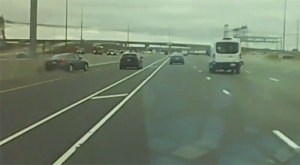 Police have released dash camera video of a fail-to-remain crash on Highway 410 in Mississauga.

The victim of a brazen hit-and-run crash on a busy GTA highway earlier this month says he and his passenger were “very lucky” they were not injured in the collision.

Speaking to CTV News Toronto on Wednesday, Chris Maxwell said he was driving home from work in the HOV lane on Highway 410 in Mississauga at around 4 p.m. on May 3 when he noticed a car in his rearview mirror quickly approaching.

“(The driver) started tailgating me and as we passed the underpass, he scooped around me on the dotted line and kind of passed right beside me. I moved over because he was very close to me,” Maxwell said.

Dash camera footage of the incident, which was given to police by a witness, shows the vehicle bump Maxwell’s car into the rumble strips. The impact caused Maxwell’s vehicle to spin out, do 180-degree turn, and crash into the wall.

Maxwell said that while his car is a “write-off,” fortunately he and his passenger did not sustain any injuries.

“We were very lucky,” he said. “The stars aligned. At 5 p.m. on a Friday afternoon, there was very, very light traffic in that area.”

He added that he does not believe he did anything to provoke the driver prior to the crash.

“I was going with the flow of traffic in the HOV lane. From what I saw in my rearview mirror, he was a single driver in the car. I guess I wasn’t going fast enough for him,” he said.

“That driver absolutely knows what they have done. They are checking their mirrors. They know what happened behind them in their wake and they did not stop,” Schmidt said.

Police are urging anyone with information about the collision to contact Port Credit OPP.

Schmidt said the vehicle involved will likely have damage to the back driver’s side corner.

Schmidt also urged the driver to turn themselves in to explain their side of the story.

“We only see this one side. Maybe there was some interaction that happened earlier on. I don’t know,” he said. “We want to find out what happened because this is a highway for everybody. This is not a personal racetrack.”

Police have released dash camera video of a fail-to-remain crash on Highway 410 in Mississauga.