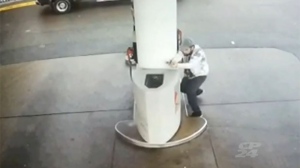 This still image taken from surveillance footage shows the suspect in a shootout at a Richmond Hill gas station on Dec. 27.

New surveillance footage has surfaced that appears to show a protracted shootout between a suspect and a police officer at a gas station in Richmond Hill last month.

It happened at a Petro Canada station near the southwest corner of Bayview Avenue and Major Mackenzie Drive at around 10:30 a.m. on Dec. 27.

Police have previously said that an officer had conducted a traffic stop on a vehicle in the area when its “driver pulled out a firearm and fired shots at the officer.” The suspect was able to flee the scene but was later arrested after a 12-hour standoff at a nearby home. The police officer did not sustain any injuries as a result of the shooting.

The footage, obtained by CTV News Toronto on Thursday, shows a male speaking with a uniformed police officer next to a parked car on the morning in question.

The male then slaps away the officer’s hand and quickly backs away, briefly disappearing from view as he goes behind the parked car.

At that point, a succession of gunshots is heard and the cop is seen firing his weapon as he quickly retreats.

The shootout did not appear to end there, however.

Footage from another location then shows the male fidgeting with a handgun near the gas pumps before kneeling down behind a trash receptacle and pointing the weapon at an unknown target.

It is not clear from the footage whether the suspect fired at that moment.

The footage then captures the suspect as he returns to the parked car where the altercation first began.

Several more shots are heard, at which point the suspect is twice seen hopping out from behind the car pointing his firearm. Again, it’s not clear whether he actually fired his weapon.

He then goes around the vehicle, sits in the driver’s seat and reverses into the side of a black jeep that appeared to be blocking him in before speeding away from the scene.

The Special Investigations Unit had been looking into the incident but dropped their investigation earlier this week after determining that the suspect did not sustain any significant injuries.

Meanwhile, the legal proceedings against a suspect identified as 34-year-old Anoshirvan Shirizadeh remain ongoing. He has been charged with attempted murder, assault with intent to resist, dangerous driving and a slew of weapons-related charges.

Police have not yet commented on the surveillance camera footage.

This still image taken from surveillance footage shows the suspect in a shootout at a Richmond Hill gas station on Dec. 27.