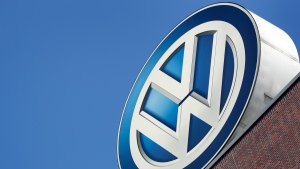 In this Wednesday, Aug. 1, 2018 file photo, the logo of Volkswagen is seen on top of a company building in Wolfsburg, Germany. (AP Photo/Michael Sohn, file)

Volkswagen's attempts to plead guilty to all 60 Canadian charges it faces in an international emissions scandal were put on hold Friday as an environmental lawyer argued the court should hear victim impact statements.

The federal government charged the behemoth this week with 58 infractions of the Environmental Protection Act, as well as two counts of providing misleading information, alleging the company imported 128,000 cars into Canada between 2008 and 2015 that violated emissions standards.

Volkswagen's lawyers said they intend to take responsibility, and have reached a plea deal with the Crown.

“We are before Your Honour prepared to plead guilty to 60 charges - all the charges before the court,” defence lawyer David Humphrey told Justice Enzo Rondinelli. “It is hard to picture more clear accountability than that.”

But the proposal was held up by a lawyer with the environmental group Ecojustice, who petitioned Rondinelli for standing in the case. Amir Attaran sought the authority to bring a motion that the court should hear victim impact statements before making a sentencing decision.

Rondinelli will rule on that next Thursday.

If Attaran is granted standing, the case will be pushed back further as the statements are gathered. If he is denied standing, it will likely go ahead as planned.

Attaran repeatedly called into question the speed of the plea following the charges, saying the public didn't have enough time to learn about the accusations and Volkswagen's responsibility.

“We as Canadians are not served by Volkswagen being charged on Monday, saying they'll plead guilty ... and having it wrapped up on Friday,” he said.

He also suggested the Crown was trying to suppress victim impact statements - something prosecutor Tom Lemon denied outside of court.

Lemon told reporters he has requested information about the victim impact statements to determine whether it would be appropriate to have them read in court.

“If they're legally admissible victim impact statements, then we'd agree to that. No problem,” he said.

Lemon said there were extensive negotiations with Volkswagen before the company was charged in Canada.

“You heard repeatedly in court that this was an exceptional case, a unique case,” he said. “I can tell you that in this environmental context, in complicated cases, it's not unknown for these resolution discussions to take place beforehand. It isn't common, but it's happened before.”

Lemon said regardless of the negotiations, he felt the Crown had fulfilled its duty to look out for the public interest.

Environment Canada's investigation, launched in September 2015, was repeatedly criticized by environmental experts and lawyers for taking too long.

Volkswagen pleaded guilty in U.S. court in 2017 for violating American laws and was fined $4.3 billion. In 2018, German prosecutors fined the company one-billion euros in the emissions-cheating case.

Several company executives and managers involved in the deception were charged in the U.S. and Germany, and some have already been sent to prison.

In total, the scheme has cost the company more than US$30 billion in fines and civic lawsuits, as well as compensation to customers who returned the affected cars for refunds or exchanges.

The affected vehicles in Canada included 3.0-litre and 2.0-litre diesel engine vehicles sold under the Volkswagen, Audi and Porsche brands.