We'll stick to plan to cap teachers' wage increases at one per cent: Phillips 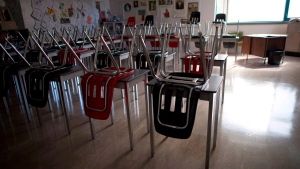 Vacant desks are pictured at the front of a empty classroom is pictured at McGee Secondary school in Vancouver on Sept. 5, 2014. (THE CANADIAN PRESS/Jonathan Hayward)

TORONTO - Ontario's finance minister says the government will stick to its plan to cap wage increases for public sector workers, including teachers, at one per cent.

Rod Phillips says there's a limit to what Ontarians can afford to pay in bargaining talks.

He also says the Progressive Conservative government has been clear about its plans since announcing the wage increase cap last spring.

Phillips' comments come at a time when the province is in the middle of bargaining talks with two major teachers unions.

The Tory government was able to negotiate the one per cent cap into a tentative agreement struck with 55,000 education workers over the weekend.

Ontario's high school teachers have said they are asking for a cost-of-living adjustment that comes in at roughly two per cent a year.