'We will fight the good fight': Advocates reflect on femicide inquest in Ontario 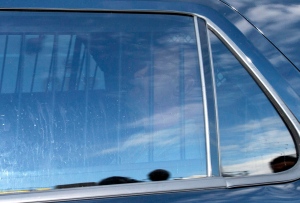 Basil Borutski arrives in a police vehicle for an appearance at the courthouse in Pembroke, Ont. on Wednesday, Sept. 23, 2015. (The Canadian Press/Justin Tang)

Members of an eastern Ontario community rocked by the deaths of three women at the hands of a former domestic partner did more than just mourn the victims during a recent coroner's inquest - they rallied around participants to help them through it.

While inquest witnesses shared harrowing details about the ravages of intimate partner violence throughout the month of June and detailed how it contributed to the deaths of Carol Culleton, Anastasia Kuzyk and Nathalie Warmerdam, supporters from Renfrew County and beyond showed up each day in a bid to limit the emotional toll of the process.

The women were murdered on their local properties on Sept. 22, 2015 by Basil Borutski, a man with a long history of violence against women, with whom all three had a past relationship.

While witnesses offered testimony in a Pembroke, Ont., hotel conference room, a very different scene played out at a similar facility nearby.

“They booked a room in the hotel across the street where there was always food, drink and human company for anyone who needed a break from the inquest,” reads a blog entry from Pamela Cross, a lawyer and expert on violence against women who testified at the inquiry. “They made sure there were allies in the room every day of the proceedings, even as they also kept their own services running.”

Such actions from allies, as well as the nature of the inquest itself, left Cross feeling the process was as hopeful as it was solemn.

“There were a lot of people who were cynical about the possibility of the inquest, and I'm not an idiot. We've seen recommendations before - hundreds, if not thousands of them - and often, very few of them get implemented,” Cross, who held community consultations ahead of the inquest, said in an interview.

“It's hard not to be cynical, but the way this inquest was set up in such a collaborative way, and bringing in so much from the community from the first day, I also felt hope. And I never lost that hope.”

Local advocacy organization End Violence Against Women - Renfrew County decorated the inquest room with peace lilies and handed out magic wands bearing hopeful messages. Community members brought in homemade treats for those bearing witness to the process, and mental health support was available to anyone who needed it.

Lisa Oegema with Victim Services of Renfrew County, one of the many organizations that makes up the EVA - Renfrew County coalition, said these small details filled the room with a “positive, caring, nurturing energy.”

“With all of that coming together, all those pieces, the energy in the room, ... the hope for change, is what got you through every day,” said Oegema, who provided testimony and attended the inquest in-person on several other occasions.

When the Renfrew County community was first approached about the possibility of the inquest three years ago, Oegema said people were clear about what they wanted from the get-go.

“Please don't come in and rip the Band-aid off our community unless there's going to be change,” she recalled residents saying as she reflected on the 86 recommendations the five-member jury presented last Tuesday.

They included one for the Ontario government to formally declare intimate partner violence an epidemic. Ontario's Ministry of the Attorney General has said it will “take time to review and properly consider” the recommendations.

Oegema said the inquest did not disappoint.

“As much as the days were long and there was great heartache in listening to many of the witnesses' testimonies, I think it was for the greater good. And I truly believe that change will happen,” she said.

Many witnesses told jurors the writing was on the wall with Borutski. A review of the case found the perpetrator had been involved in the family and criminal justice system for 40 years, with repeatedly documented concerns about domestic violence and threats to harm others.

Culleton, Kuzyk and Warmerdam had been abused by the perpetrator and told multiple people that they lived in fear of him. They told either friends, family or people working in the criminal justice system about the depth of those fears.

Oegema said EVA - Renfrew County will meet again in September to review the jury's recommendations and identify areas of improvement to continue the fight to end violence against women.

“When we do sit down to look at these recommendations, we'll be able to say, 'Yes, our agency can do that,”' she said.

Erin Lee, executive director of Lanark County Interval House and Community Support, also testified at the inquest and brought her staff there in solidarity.

She said it was refreshing to see the inquest into the deaths of Culleton, Kuzyk and Warmerdam have a specific focus on intimate partner violence in rural communities.

The inquest heard that support service providers in more remote areas tend to have limited financial resources to support their work, while victims in those communities face numerous barriers when trying to seek support.

Although some of the recommendations stemming from the inquest will require “political will,” Lee said anti-violence agencies in Ontario will continue to “lean in and work towards ongoing and creating change” within their communities.

“We will not give up. We will continue to fight the good fight. We will embrace the recommendations and try to move them forward,” she said. “Carol Culleton and Anastasia Kuzyk and Nathalie Warmerdam will not be forgotten. They will be remembered and their names will be said.”