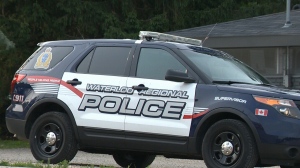 A file image of a Waterloo Regional Police car.

A woman has been arrested after a baby was found dead in Kitchener, police say.

Officers were called to a home in the area of Cedarwoods Crescent in Kitchener after the baby was found Sunday.

No other information has been released so far.

Officers on scene in area of Cedarwoods Crescent in Kitchener after an infant was located deceased.

One female has been arrested.