Woman found in Davisville apartment was strangled to death: Police 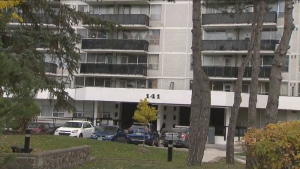 Police investigate after two people were found with fatal injuries at a Davisville Avenue apartment October 26, 2019.

Toronto police say one of two people who were found with fatal injuries in a Davisville apartment last month was the victim of a homicide.

Officers responded to an unknown trouble call at an apartment building at 141 Davisville Avenue at around 12:30 a.m. on Oct. 26.

When officers entered one of the units in the building, they found a woman without vital signs and a man suffering from obvious signs of trauma.

Both were rushed to hospital where they were later pronounced dead.

On Monday, police identified the woman as 22-year-old Bethelhem Geleta of Toronto. An autopsy revealed that she was strangled to death, police said. Her death marks the city’s 59th homicide of the year.

The man who died has been identified as 30-year-old Aboma Daba of Toronto. Police did not say how he died.

Police say there are no outstanding suspects in the case.