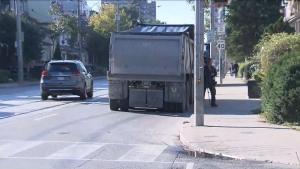 A dump truck that struck a pedestrian in the city’s Harbord Village neighbourhood on Tuesday morning is shown.

A woman was struck by a dump truck after stepping off a streetcar in the city’s Harbord Village neighbourhood on Tuesday morning.

It happened on Bathurst Street at Ulster Street just before 9 a.m.

A witness tells CP24 that the streetcar was stopped when a dump truck travelling in the right lane went past its open doors and struck the woman.

The witness said that the driver of the streetcar had honked their horn in an apparent attempt to get the dump truck to stop prior to the incident but to no avail.

The severity of the woman’s injuries are not immediately clear.

Services on the 511 Bathurst streetcar was briefly disrupted but resumed at around 9:30 a.m.