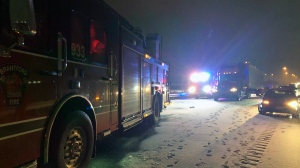 A 20-year-old woman suffered critical injuries after a two-vehicle collision on Highway 403 in Brantford Wednesday night.

Emergency crews were called to a section of the highway between Wayne Gretzky Parkway and Garden Avenue, just before 6 p.m. for reports of a crash.

As a result, the car was torn in half, and the driver was ejected 30 feet off the highway, OPP said.

The victim was transported to a Hamilton hospital with life-threatening injuries.

OPP said the driver of the truck was also taken to a local hospital for precautionary measures.

A third vehicle was hit by flying debris, but no injuries were reported.