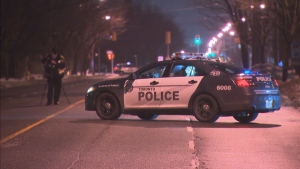 Police investigate after a woman was struck by a vehicle that fled the scene at Midland and Steeles avenues Monday November 18, 2019. (CP24)

A woman has been rushed to a trauma centre after being struck by a vehicle that fled the scene in Scarborough’s Milliken neighbourhood.

It happened shortly after 6:30 p.m. at Midland and Steeles avenues.

The woman, believed to be in her 40s or 50s, was struck by a dark-coloured SUV that fled the scene, police said.

The woman was found unconscious in the middle of the road.

Toronto Paramedic Services said the woman may have been struck by more than one vehicle, and was subsequently taken to hospital with very serious injuries.

“It’s still being investigated in regards to whether there were in fact two vehicles involved,” Sgt. Antonio Macias told CP24 at the scene. “One of the vehicles did remain on scene.”

He said it’s not yet clear whether the vehicle that remained at the scene was involved in the incident.

Midland Avenue is closed both ways between Steeles and Passmore avenues as police investigate.

Macias said police are appealing to anyone who witnessed the incident to contact police.