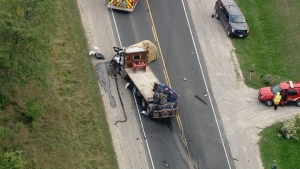 A head-on crash in Bradford Friday afternoon claimed the life of a Barrie woman, her adult son and her nine-year-old grandson, police say.

South Simcoe Police said Friday they were called to Yonge Street, south of 14th Line, at about 4:30 p.m. for a report of a head-on collision.

They arrived to find that an SUV heading northbound on Yonge collided with a heavy truck heading southbound.

A 61-year-old Barrie woman and her 37-year-old son from Newmarket were pronounced dead at the scene.

The nine-year-old boy was rushed to hospital where he succumbed to his injuries.

Investigators did not release their names.

The driver of the truck was treated at the scene and released by paramedics.

Anyone who witnessed either vehicle prior to the crash is asked to call police at 905-775-3311.