Woman taken to hospital after being stabbed at downtown business 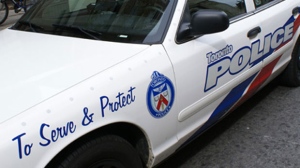 A woman and a male suspect have both been taken to hospital following a stabbing inside a business in the city’s downtown core.

Officers were called to a stabbing at an office on Bond Street, between Dundas and Gould streets, shortly before 10:30 a.m. Friday morning.

According to police, a woman was found bleeding, with an injury to her hand. She was taken to hospital with serious but non-life-threatening injuries, Toronto Paramedic Services said.

The man barricaded himself in a bathroom. He was eventually arrested and taken to hospital as well, police said. It was not clear what kind of injuries he sustained.

The man and woman did not appear to know each other, police said.