Woman tells court Hoggard choked her during sex assault, making her fear for her life 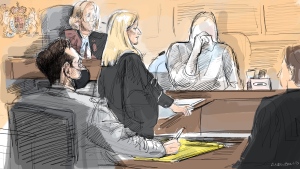 A complainant takes the stand in the sexual assault trial of musician Jacob Hoggard May 10, 2022.

WARNING: This story contains graphic details that are disturbing

TORONTO - An Ottawa woman told a Toronto court Tuesday that Canadian musician Jacob Hoggard choked her hard enough to make her fear for her life as he sexually assaulted her in his hotel room more than five years ago.

The woman, who is the second complainant in Hoggard's sex assault trial, testified that she agreed to meet the singer in Toronto in November 2016, nearly two weeks after the two of them crossed paths on the dating app Tinder.

The woman said she knew they were meeting up to have sex, but that Hoggard raped her anally, vaginally and orally, repeatedly slapping her and spitting in her mouth. He called her a pig and a slut, and made “some sort of pig noise” at her, she said. He didn't use a condom, she said.

At one point, Hoggard dragged her off the bed and into the bathroom by her legs, she said. He sat on her chest on the tile floor and said he would urinate on her, then asked her to urinate on him, she said. She refused and he didn't go through with it, she said.

The woman testified that at another point, Hoggard choked her hard enough that she couldn't breathe.

“I thought he might kill me,” she testified, adding she was worried no one would know where she was.

Hoggard, the frontman for the band Hedley, has pleaded not guilty to two counts of sexual assault causing bodily harm and one of sexual interference, a charge that relates to the sexual touching of someone under 16.

An agreed statement of facts says he had a sexual encounter with each of the complainants after they came to his hotel on separate occasions in the fall of 2016. Neither woman can be identified under a publication ban.

The complainant testifying Tuesday, who is now in her late 20s, recalled getting up early to take the train to Toronto on Nov. 22, 2016 - it's an agreed fact in the case that Hoggard bought the ticket - and going to meet him at the Thompson Hotel.

He came down to fetch her from the lobby and they went up to a room together, and Hoggard told her his regular room wasn't ready yet, she said.

Once inside, he pushed her up against the wall and aggressively tried to kiss her, the woman testified. She resisted, and Hoggard appeared angry, telling her she could go home, she said. She thought he was “rude,” but she didn't have anywhere else to go, she said.

Hoggard was drinking something and told her it was “lean,” she said. He seemed high and appeared to be slurring a bit, she said.

Eventually there was a knock on the door and someone told them Hoggard's room was ready, she testified. Hoggard went first and told her to come in after him, which she did, she said.

“That's when he pushed me on the bed and raped me,” she said, tearing up on the stand.

The woman testified that Hoggard was acting “like a psychopath” during the encounter and that she was afraid of him. “His eyes were absolutely terrifying,” she said.

She said it was like Hoggard had become “a different person,” noting he had been nice in all their conversations before that day. She wouldn't have gone to meet him had she expected him to act this way, she said.

Hoggard took her phone at some point and put it in the bedside table, telling her women were always taking his picture and posting it online, she said. She got it back about an hour before leaving the hotel, she said.

He took several showers over the course of the encounter, she said. During one of his showers, the woman told him she was bleeding vaginally and anally, but he didn't respond, she said. He also ordered room service on one occasion, and took a phone call, she said.

Afterwards, Hoggard called her a taxi and she went to a Tim Hortons near the train station to wait for her train back to Ottawa, she told the court. She felt “numb,” she said.

Hoggard sent her a message while she was in the taxi, saying it had been a wonderful time and he couldn't wait to see her again, she said. The woman said she felt “very confused and disgusted” after receiving his message.

“He knows what he did and I don't know why he would say that after doing that to someone,” she said.

After talking to her friends the next day, the woman said she texted Hoggard, telling him he had raped her. He replied within hours, saying it had been consensual, she said. The message sounded “very proper” and not how he usually talked, she testified.

She asked him to talk on the phone, wanting an apology, she said. They did talk on the phone briefly but he didn't apologize, and they never spoke after that, she said, adding she believed he had blocked her number.

The woman said she never planned to tell anyone what happened, aside from a few close friends, but she did go to the doctor five or six days after the incident because she was worried there was a tear in her vagina.

“I didn't think that anyone would believe me, because I went there thinking that we would have consensual sex and I got raped instead,” she said.

In 2018, she did an anonymous interview with the CBC and later went to police, she said.

During cross-examination, the defence suggested Hoggard didn't prevent the woman from leaving at any point and, in fact, left her alone on several occasions while he showered.

“When he was raping me he was stopping me from leaving the room,” the woman replied.

Defence lawyer Megan Savard also suggested the woman had been expecting to attend an event with Hoggard that day and was upset when he instead told her to leave the hotel. She pointed to the fact that the woman had brought a change of clothes and some makeup.

The woman said she brought clothes and makeup with her “all the time” and while she believed Hoggard had an event that day, she had not expected to go with him.

The other complainant, who was 16 at the time, has testified that Hoggard repeatedly raped her vaginally and orally, and attempted to do so anally, on Sept. 30, 2016.

She also testified the singer groped her backstage after a show in Toronto in April 2016. Defence lawyers have suggested the alleged groping did not happen.

They have also suggested the two of them had consensual sex and the young woman made up a “rape story” because she was embarrassed about being “used” by a rock star for whom she had developed romantic feelings.

This report by The Canadian Press was first published May 10, 2022.