Wynne: Liberal supporters know party is bigger than the 'stupid' actions of one person 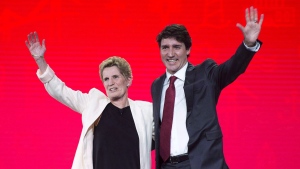 Prime Minister Justin Trudeau and Ontario Premier Kathleen Wynne wave to the crowd at the federal Liberal national convention in Halifax on Friday, April 20, 2018. A conservative political advocacy group that was instrumental in taking down the Liberals in Ontario is going national, aiming to do toTrudeau what it did to Wynne. THE CANADIAN PRESS/Andrew Vaughan

Liberal MPP and former Ontario premier Kathleen Wynne says that the party's supporters currently find themselves in the uncomfortable position of having to reconcile their Liberal values with the “stupid” actions of the party’s leader.

Speaking with CP24 on Friday, Wynne said that while she recognizes people are frustrated with Justin Trudeau’s decision to wear blackface, most do not believe that the Liberal leader is racist.

“It was a really bad decision that he did these things, a kind of stupid decision really to have done them. He should have known better and he’s said that,” Wynne said.

“I don’t think people believe Justin Trudeau is a racist. If it had been somebody else who had done this they might have said, 'Well we kind of knew he was racist anyway,' or 'We kind of expected it'… but nobody believes Justin is a racist. They believe he did a stupid thing.”

The scandal first came to light on Wednesday night when TIME Magazine published a black-and-white photo of Trudeau taken in 2001 at an “Arabian Nights”-themed gala hosted by a Vancouver private school where he worked as a teacher.

Trudeau, who was 29 at the time the event, was dressed in a turban and robe and had his face, neck, and hands covered in dark makeup.

Hours after the photo was published, the Liberal leader publicly apologized for his actions, which he referred to as “racist.” He admitted that he had done blackface one other time, when he performed Harry Belafonte's "Banana Boat Song (Day O)” in high school.

By Thursday morning, the image of Trudeau’s high school performance had surfaced online, along with a video published by Global News of a separate incident of him in blackface, sticking his tongue out and raising his arms over his head. Trudeau’s camp said the video was recorded in the early 1990s.

Following the release of the newly discovered material, Trudeau again apologized. He could not, however, confirm if those were the only three instances where he wore blackface.

Wynne, who has known Trudeau for decades and campaigned for him in 2015, said she can’t understand how the incidents went unnoticed for so many years.

Wynne said she believes many Liberal supporters understand that the party is “more than one person.”

“I think what a lot of people are going to do is they are going to say, ‘Look, in the context of this election, this man has put forward policies that I believe in, the party is more than one person, the value system is more than one person, and I am now going to move on, work for my Liberal candidate, because I believe that the Liberal brand and the Liberal value system is what we need in this country,’” Wynne said.

Wynne noted that Trudeau’s upbringing as a good looking, straight, white son of a prime minister wouldn’t have provided him with the optimal environment for “an education in empathy.”

“I’m not excusing that. Honestly, I am the last person in the world that would say you shouldn’t examine your privilege but if he didn’t then that is his fault and he needs to take responsibility for that. But is he a racist? No he’s not,” she said.

“So I think we need to have that bigger discussion because if even someone who is not a racist, like Justin Trudeau, could do something so stupid, what does that say about structural racism?”

Wynne added that the election has to be about more than these photos.

“That is what this election has to be about. Not about one guy and something that he did that was stupid in the past.”