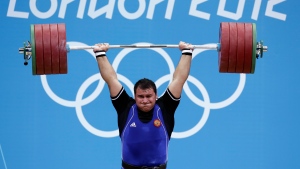 In this file photo dated Tuesday, Aug. 7, 2012, Ruslan Albegov of Russia competes during men's over 105-kg weightlifting competition at the 2012 Summer Olympics, in London. The International Weightlifting Federation said Tuesday Aug. 13, 2019, evidence against the five lifters, including Olympic bronze medalist Ruslan Albegov, comes from new investigations by the World Anti-Doping Agency into widespread drug use in Russian sports, which could herald a new wave of cases across a range of sports. (AP Photo/Hassan Ammar, FILE)

MOSCOW - Five Russian weightlifters, all of them world or European championship medallists , face doping charges which could herald a new wave of cases across a range of sports.

The International Weightlifting Federation said Tuesday that evidence against the five lifters, including Olympic bronze medallist Ruslan Albegov, comes from new investigations by the World Anti-Doping Agency into widespread drug use in Russian sports.

IWF president Tamas Ajan said the alleged offences occurred “some years ago” and should be seen as part of efforts to clean up weightlifting, which was responsible for dozens of doping cases at recent Olympics.

“We have not shown any hesitation in taking the right decisions,” he said in a statement. “While the IWF has done so much to begin a bright new chapter for our sport, we will also do what we can to pursue historical cases of doping.”

Albegov is a two-time world champion who won bronze in July in a test event for next year's Olympics in Tokyo.

Russia was banned entirely from weightlifting at the 2016 Olympics when the IWF said its doping problem brought the sport into disrepute. For next year's Olympics in Tokyo, Russia is among 17 countries hit with new doping-related restrictions on the size of their squads.

WADA has been analyzing a vast archive of data obtained in January from the anti-doping laboratory in Moscow, where cases were routinely covered up for years. WADA has started handing over its results to sports federations. It also obtained a batch of stored drug-test samples in April.

The lab data was crucial to bans for two Russians in the winter sport of biathlon in June. The International Biathlon Union handed Alexander Chernyshov and Alexander Pechyonkin longer bans because it deemed their conduct was aggravated by being part of an “organized doping scheme.”

WADA president Craig Reedie said at the time that he expects more than 100 new doping cases to be brought across various Russian sports. Only a small fraction has so far been announced.