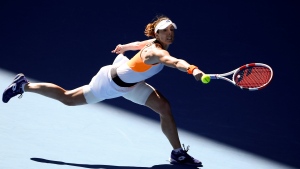 Alize Cornet of France makes a backhand return to Simona Halep of Romania during their fourth round match at the Australian Open tennis championships in Melbourne, Australia, Monday, Jan. 24, 2022. (AP Photo/Andy Brownbill)

MELBOURNE, Australia (AP) -- Alize Cornet dropped to her knees on the hard blue court, clasped her hands and took a few moments to let it sink in.

In her 17th trip to the Australia Open, her 63rd run at a Grand Slam, and two days after celebrating her 32nd birthday, Cornet finally qualified for the quarterfinals at one of the four major events in tennis.

Cornet recovered after a second-set meltdown in the hot Melbourne sun on Monday to advance to the last eight at the Australian Open with a 6-4, 3-6, 6-4 win over two-time major champion Simona Halep.

"It's never too late to try again!" Cornet said in her on-court TV interview. "To be in my first quarterfinal. It's a dream come true.

"The journey goes on. I still can't believe it."

Cornet led by a set and 3-1 before losing five consecutive games and 16 straight points as Halep took the match to a decider.

The match was 2-2 in the third set after Cornet held a service game at love, saying "allez" after every shot she hit.

Halep got a break-point chance two games later with a forehand down the line that just caught the outside of the paint and which Cornet could barely believe. She saved it and held serve, then broke Halep's serve for a 4-3 lead that set her on course for the quarterfinals.

Cornet will next play Danielle Collins, the No. 27 seed from the United States who beat 19th-seeded Elise Mertens 4-6, 6-4, 6-4 in an almost three-hour match to open play on Rod Laver Arena. Collins was a semifinalist in Australia in 2019.

Cornet made her main draw Grand Slam singles debut as a wild-card entry at the 2005 French Open. She lost five previous fourth-round appearances but had gone close to reaching the quarterfinals before, having match points in the fourth round in Australia in 2009 before losing to eventual runner-up Dinara Safina.

With a ranking of 61 -- 50 lower than her career-high No. 11 -- Cornet came into the 2022 season acknowledging retirement must be close and that it was now or never for a Grand Slam breakthrough.

"I don't know if it's helping," she said. "I just told myself that if it should happen, then it will happen. Maybe leave it in the hands of fate, destiny, I don't know."

The second-ranked Medvedev is trying to become the first man in the Open era to win his second major singles title in the next Grand Slam event. He's now potentially three wins from achieving that.

Medvedev was a runner-up in Australia last year but avenged that with a win over Novak Djokovic in the U.S. Open final. Djokovic isn't defending his Australian Open title after being deported on the eve of the year's first major for failing to meet the country's strict COVID-19 vaccination criteria.

Cressy's serve-and-volley style created some frustrations for Medvedev, who said late in the fourth set that this was the "most unlucky day I've ever had in my life." His luck changed quickly. After saving eight break-point chances in the set, Cressy was broken in that game and Medvedev served out at love.

The temperature hit 34 degrees Celsius (93 degrees F) on Day 8, with extra breaks allowed for players to cope with the heat.

Cornet used bags of ice to cool down her head during changeovers, and draped cold towels over her neck.

"I just stopped thinking after ... 30 minutes of playing. My brain was already like, overloaded," Cornet said. "My vision was not clear anymore. My hands were shaking."

But, she added, "I thought, on the other side of the court, she was not feeling much better than me."

Her victory over Halep, a former Wimbledon and French Open champion and runner-up in Australia, gave her a record for most appearances at a major before reaching the quarterfinals. Tamarine Tanasugarn previously held the mark at 45, set at Wimbledon in 2008.

Cornet had to do it the hard way, too. She defeated third-seeded Garbine Muguruza in straight sets in the second round but had to rally from 6-4, 4-1 down to beat 2021 French Open semifinalist Tamara Zidansek in the third round.

Collins hasn't had a straight-forward path, either, the 28-year-old American having to rally from a set down to win back-to-back matches at a Grand Slam tournament for the first time.

"The last couple years after I made semis I think I lost like second round each year, so to be back in the quarters means a lot," Collins said. "It's taken a lot to get to the quarters, some really tough battles and tough opponents."

In the first of the night matches, 2020 French Open champion Iga Swiatek beat Sorana Cirstea 5-7, 6-3, 6-3 to move into a quarterfinal match against either second-seeded Aryna Sabalenka or Kaia Kanepi.