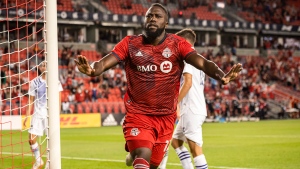 TORONTO - Interim coach Javier Perez called it a fairy tale. But Jozy Altidore's goal in his return to action after eight weeks on the outs with Toronto FC did not come with a happy ending Saturday.

Still there was plenty to celebrate as BMO Field echoed with the sounds of soccer and its fans.

Altidore's 72nd-minute feel-good moment for TFC, playing at home in front of fans for the first time since March 2020, was negated minutes later by an Orlando goal from the penalty spot.

Altidore, who last played May 22 due to a falling out with former coach Chris Armas, came on in the 64th minute to a standing ovation. And eight minutes later, Yeferson Soteldo fed fullback Justin Morrow whose cross found the big man in front of goal and Altidore, between two defenders, rose high to head the ball home.

“The timing of the ball from Soteldo makes the goal,” Altidore said later.

Altidore, pounding the crest on his jersey, and his teammates headed to the southeast corner of the pitch en masse to celebrate.

For the Toronto players, it really was home sweet home after a long time away.

“The past 16 months, we've talked about trying to be professional, do a job,” Altidore said. “But people have to understand that it's not only the players that are on the road, it's our kids, our families, getting them out of school, in school, them being uncomfortable as well. That weighs on you, as a parent, as fathers. So to finally be back in a normal environment, so to speak â€¦ you saw the relief from the guys, just to be able to play at home, to have that normalcy back again. It was great.

“I think you saw that in that celebration. It's a big relief to be back home.”

But Orlando (6-3-4) tied it up in the 77th minute on a Nani penalty kick with video review convincing referee Marcos de Oliveira to point to the spot after goalkeeper Alex Bono took out Orlando's Benji Michel. Bono was left exposed after Brazilian fullback Auro misread a long high ball, allowing the Orlando attacker to go in alone.

Bono got a hand to Nani's penalty kick but could not stop it.

Toronto (2-8-3) has a win and a tie under Perez, who noted the points came against Eastern Conference leaders in New England and Orlando. And with Inter Miami's game at the New York Red Bulls postponed due to poor weather, Toronto moved out of the league basement.

Attendance was capped at 7,000 with the crowd drawn from frontline health-care workers, first responders and season ticket-holders.

“Welcome back to BMO Field,” the PA announcer said before introducing the TFC starting lineup. “It's been a long 16 months.”

“Football's Come Home,” read one sign in the South Stand.

It was also the first time all of TFC's designated players - Altidore, Soteldo and Alejandro Pozuelo - were on the field at the same time this season.

Toronto went 11-15-5 in all competitions in the 10 1/2 months since its last BMO Field outing, with eight of those wins coming last year. Prior to Saturday, the club had won just three of its last 17 matches (3-12-2) in regular-season and post-season play away from home.

Saturday's crowd was supposed to be masked and spread out around the stadium. Still the downsized supporters' groups in the South Stand made their voices heard.

“I think it was a very special moment for the whole team, for me, for the players, for everybody involved at the club to have the fans,” said Perez, a native of Spain. “That's the strength that they give us. I think every player felt it tonight.

Attendance will increase to 15,000 for next Wednesday's home match against the New York Red Bulls.

The next home match after that is Aug. 1 against Nashville SC. TFC and Major League Soccer have not yet announced plans for that game and beyond.

The spectators did not see a classic although Soteldo drew oohs and aahs for his remarkable ball control. At one point in the first half the five-foot-three Venezuelan bamboozled himself, losing his footing while trying to dance around a defender.

Like former Toronto star Sebastian Giovinco, Soteldo is short in stature but long on talent and trickery. And he routinely gets battered by bigger, slower defenders. The pocket-sized Venezuelan spent a fair bit of time on the ground, arms raised in disbelief at the treatment he was receiving.

Soteldo had his way with Orlando fullback Kyle Smith for most of the evening.

Chances were few and far between in the first half. Dom Dwyer had the best chance for Toronto in the 35th minute after Soteldo pinched the ball off an Orlando player and raced into the opposition end. He fed Dwyer but the forward's touch was heavy and he lost the ball.

A minute late Toronto appealed unsuccessfully for a penalty when Soteldo went down in the penalty box in a collision with Andres Perea after a nice interplay with Pozuelo.

Orlando's two best chances in the half both prompted an offside flag.

The visitors came close in the 58th minute when Michel found substitute Chris Mueller in the penalty box. But Morrow got back to get a foot to the ball, sending it away from Mueller and off the post.

Auro went down in the 60th minute, complaining of an Orlando elbow, but nothing came of it.

Toronto was coming off a 3-2 win July 7 at New England that snapped a six-game losing (and seven-game winless) streak. TFC came in to the game with the league's worst defence, conceding 2.42 goals a game.

Orlando had lost two straight, beaten 3-1 at Chicago in its last outing July 7. The Lions had won three straight before that, part of a 6-1-3 start to the season.

Goalkeeper Pedro Gallese (Peru) and defensive midfielder Sebas Mendez (Ecuador), back from Copa America, returned to the Orlando starting lineup. But Mendez lasted just 13 minutes, helped off after a second collision with a teammate.

This report by The Canadian Press was first published July 17, 2021