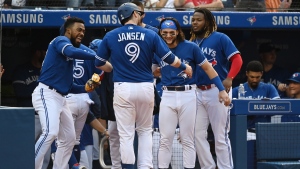 The Mariners (90-71) kept their playoff hopes alive after defeating the Los Angeles Angels 6-4 on Saturday and head into the final day of the season tied with Blue Jays, though the Mariners hold the head-to-head advantage over the Toronto side.

Mitch Haniger starred for the Mariners in their epic win as he drove in five runs and also crushed a two-run homer in the fifth inning that broke a 1-1 tie.

Despite their stunning victory, the Mariners will need help from the teams ahead of them if they are to play in the postseason.

Should the four teams remain tied after Sunday's action it would mean two tie-breaker games on Monday, with the winners playing the wildcard contest on Tuesday.

The winner of the wildcard moves into the divisional round where the Tampa Bay Rays, Houston Astros and Chicago White Sox await.

"It kind of makes sense that it would come down to the very last day," said Yankees outfielder Brett Gardner. "That seems about right with the way the season has gone."

Saturday's action settled nothing as the Yankees blew a chance to clinch a wildcard berth when they were hammered 12-2 by the Rays while the Blue Jays kept their postseason ambitions moving in the right direction with the drubbing of the Baltimore Orioles 10-1.

Toronto got home runs from five different players giving them an MLB leading 258 on the season establishing a new team record.

The Red Sox survived a roller-coaster end to their afternoon beating the Washington Nationals 5-3 to keep pace with the Yankees.

Deadlocked 1-1 going into the ninth the Red Sox scored four but then needed to fight off a Nationals rally in the bottom of the inning sparked by an Andrew Stevenson two-run homer.

In New York, Rays Brandon Lowe slammed three home runs to power Tampa to 100 wins on the season and deny the Yankees an opportunity to clinch a wildcard.

Toronto will hope for similar production on Sunday needing a win to stay in the chase.

It has been a particularly nomadic marathon for the Blue Jays who began the season playing home games at their Spring training base in Florida, moved to Buffalo, New York for much of the summer before COVID-19 restrictions in Canada relaxed enough to allow them to return to Toronto in late July.

For traveling that long-and-winding road, Toronto manager Charlie Montoyo believes his team has earned the right to be in contention on the final day of the season.

"This team deserves credit and we are going to go all the way to 162," Montoyo said. "We could have quit in Dunedin, then when we moved to Buffalo we could have quit there too but we never did and we deserve to be here in this moment."

(Reporting by Steve Keating in Toronto and Manasi Pathak in Bengaluru; Editing by Sandra Maler and Christopher Cushing)