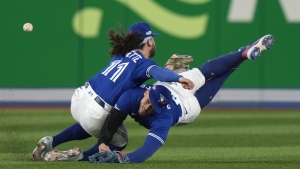 The post-season ended shortly after it began for the Toronto Blue Jays. The Seattle Mariners shut out the Blue Jays in Game 1 last Friday and came back from a seven-run deficit in a 10-9 victory a day later to complete a two-game sweep.

The wild-card series exit has forced Toronto's team brass to shift focus to the off-season and 2023 campaign. Here's a look at five things to watch as the Blue Jays aim to make improvements for next year.

The unpredictable nature of a short best-of-three series is a challenge for all teams in the wild-card mix.

The top two division winners are rewarded with first-round byes and can rest a little easier knowing they have home-field advantage in a longer best-of-five set.

Winning the East Division and securing a top-two finish in the American League will be a main goal for the Blue Jays in 2023. The wild-card round has not been kind with two sweeps in the last three years.

Pitching depth will need to be addressed to have a decent chance at a division crown. A left-handed bat or two would also help.

The front end of Toronto's starting rotation is one of the best in the big leagues. The back end needs work if the Blue Jays are going to contend.

Alek Manoah has emerged as an ace of the staff and Kevin Gausman delivered in his first season with the team.

Pending free agent Ross Stripling was reliable but Jose Berrios was inconsistent and Yusei Kikuchi landed in the bullpen. Mitch White struggled mightily and Hyun-Jin Ryu may not be ready to play next season after elbow surgery.

Even if Stripling were to return, at least one more starter is needed. A relief crew that has been middle of the pack over the last couple years also needs attention.

The Blue Jays were 46-28 under manager John Schneider after he replaced the fired Charlie Montoyo in July.

The interim position lasted until the end of the season. Now the Blue Jays have to decide whether Schneider will be back as a full-time skipper.

Toronto had an uneven first half and stabilized in the second half under Schneider. The Blue Jays won 92 games overall and earned the fourth overall seed in the American League.

Blue Jays general manager Ross Atkins praised Schneider's performance at his end-of-season availability but said more time is needed before a final decision is made.

It's quite possible the Blue Jays try some experimentation to maximize roster depth.

Could centre-fielder George Springer move to right field? Could Bo Bichette be moved to second base? Could catcher Gabriel Moreno be used in the field?

Off-season additions and trades may impact potential position changes but the Blue Jays could get creative when spring training begins in February.

The off-season will present another opportunity to sign key players to long-term extensions if both sides are open to it.

Main position players are all under contract for 2023 so the team could very well have a similar look.

However, the pressure will be heightened for a team that made small steps this year but underachieved. This club is in win-now mode and another first-round exit would be a big disappointment.