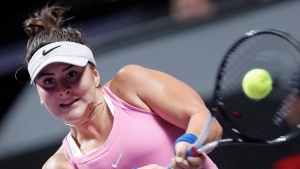 Bianca Andreescu is slated to make her return to the hardcourt next week in Canada's Fed Cup tie against Switzerland.

The world No. 6 from Mississauga, Ont., hasn't played a competitive match since suffering a knee injury three months ago at the WTA Finals.

The official draw will be held Feb. 6 ahead of the weekend tie on the Swiss Tennis Arena hardcourts in Biel, Switzerland.

If Canada wins, it would qualify for the Fed Cup Finals in Budapest in April. A loss would see the team fall into a playoff tie against a Regional Group I nation.

The Swiss lineup is expected to be announced this week.