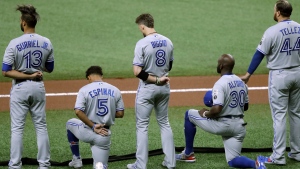 ST. PETERSBURG, Fla. - Before the first pitch of the season, Anthony Alford developed an even closer bond with Toronto Blue Jays teammate Cavan Biggio thanks to the Black Lives Matter movement.

Prior to taking the field at Tampa Bay, Biggio asked Alford if it would make him more comfortable if he would kneel alongside him during the national anthem.

Alford, who is Black, said he was planning to kneel regardless, but appreciated the support from a white teammate.

“Much respect goes to him because it took a lot of courage for him to get down on that knee and show us that 'Hey I'm with you not just as a teammate but as a friend and as a brother,”' Alford, wearing a Black Lives Matter T-shirt, said during a 25-minute video conference with reporters prior to Saturday's second game of the series against the Rays.

“Me and Cav became real close over the past few years (in the Jays' minor-league system). It just really meant a lot for him to get down there with me.”

The outfielder recalled a recent conversation with Blue Jays shortstop Bo Bichette that also clearly meant a lot to Alford.

“Bo went to a majority Black school with a lot of kids from the 'hood. Hopefully he's OK with me sharing this,” Alford said.

“He was telling me how there's so much potential, so many kids with just God-gifted abilities that go to that school. And 30 minutes up the road is kids that are nowhere close when it comes to skill wise or ability.

While Alford said he has received full support from the Blue Jays, he acknowledges there is plenty of work ahead. Several Blue Jays have worn Black Lives Matter T-shirts and some kneeled for the anthem, but others opted not to do so.

“It definitely would have meant a lot to me if everybody wore it, but the reality is we still have a long way to go,” Alford said. “People have their beliefs and I respect them as human beings. It's not going to make me feel any different about them as a person. I'm going to still love them, I'm still going to joke with them, laugh with them, and communicate with them. It was disappointing, but at the same time I still respect them.”

Alford regularly goes back to where he grew up in Mississippi to try to convey a message of hope. He says he wants kids to know any life goals are attainable, while stressing it won't be easy.

Alford can relate to the challenges. He recalled, as a 12-year-old, having a police officer draw a gun while searching the car he was in as he returned from a cottage with some friends.

“Things like that happened all the time,” Alford said. “It's really not fair, nobody really deserves that. I shouldn't have to feel intimidated or scared or nervous when police come around. You're supposed to protect me. Every time you come around I get nervous.

“Even to this day, if I'm driving and see a police car, the first thing I'm going to do is look and see how fast I'm going because I don't want to have any interaction with a police officer. I just don't want to give them the time of day. It's sad it has to be like that.”