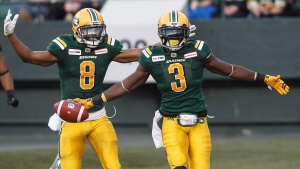 Edmonton Eskimos Kenny Stafford (8) and Natey Adjei (3) celebrate a touchdown against the B.C. Lions during first half CFL action in Edmonton, Alta., on Friday June 29, 2018. THE CANADIAN PRESS/Jason Franson.

Campbell, 32, was released by the Alouettes last week after spending two years in Montreal. He began his CFL career with the Calgary Stampeders in 2016 after five years in the NFL with Tennessee and Jacksonville.

"He's a very good fit for how we plan to play," said Argos vice president of player personnel John Murphy. "What we're asking him to do, he'll ideally fit in. We know how productive he's been."

Adjei, a native of Mississauga, Ont., spent the first two seasons of his CFL career with the Argos after being drafted 22nd overall by Toronto in the 2013 draft.

The 30-year-old Adjei spent the past four seasons with the Edmonton Eskimos, who released him recently.

Lawrence started all 12 games in his senior year last season at Rhode Island.

Broxton is a former Big 12 all-star at Baylor. He signed with the NFL's Baltimore Ravens as an undrafted free agent in 2016, and spent most of that season on their practice roster.