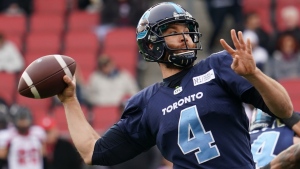 TORONTO - After a long season on the sidelines, Canadian quarterback Michael O'Connor finally took a snap for the Toronto Argonauts on Saturday.

The 23-year-old pivot shook off the rust with a touchdown pass on his fifth play under centre with an 11-yard pass to Rodney Smith early in the fourth quarter of the Argos' 39-9 victory over the struggling Ottawa Redblacks before 12,995 at BMO Field.

“It was difficult, but that is just part of the professional business,” said O'Connor, whose last live snap was back in the pre-season. “A lot of people have to go through that. It's definitely no exception for me. It was definitely difficult without the live reps.”

O'Connor, who grew up in the Ottawa suburb of Orleans, almost threw a touchdown pass on his first snap, but his toss to Armanti Edwards was underthrown.

“I was disappointed I underthrew it,” O'Connor said. “It should have been a touchdown. But you live, and you learn, and you grow.

“There still is a lot of growing to do, and there were a lot of mistakes out there, and stuff I have to clean up.”

O'Connor comes from a football family. He's named after his uncle - a stud linebacker - who died as the result of a car crash two months before the younger O'Connor was born. Uncle Mike won Vanier Cups with Queen's in 1968 and seven years later with Ottawa when he was in teacher's college. He then played for the Ottawa Rough Riders.

O'Connor, who was the MVP in the University of British Columbia's national championship in 2015, wound up throwing his first professional touchdown against his hometown team.

“It was kind of cool. I can't lie,” he said. “Aside from that, it could have been a faceless opponent. I was just trying to execute. I don't see too much into things like that, but like I said, it was kind of cool to play against the hometown team.”

Bethel-Thompson was impressed with the play of his younger teammates.

“It's great to watch them play and to see that all of the work they did this year pay off,” Bethel-Thompson said.

Bethel-Thompson tossed two touchdown passes in the first half. Prukop followed up with two more in the third quarter.

O'Connor finished the game with five completions on nine attempts for 61 yards against his hometown team.

Prukop tossed touchdown passes to receiver Smith and running back A.J. Ouellette before the third quarter was eight minutes old. Smith's touchdown reception was for 13 yards, and Ouellette's was for 15 yards.

The Argos third drive of the second half resulted in a 30-yard field goal from Zach Medeiros.

“If that's not rock bottom, I'd like to see what the bottom looks like,” Redblacks head coach Rick Campbell said.

The Redblacks offence struggled early on. But as the three-minute warning in the first half approached, quarterback Will Arndt got his act together.

He marched Ottawa across the midfield line for only the second time in the half and then hit Dominique Rhymes for a 36-yard strike.

A successful two-point conversion with a pass to Brad Sinopoli knotted the game at 8-8.

Argos head coach Corey Chamblin revealed that Prukop and O'Connor would receive more playing time in the season finale in Hamilton next Saturday.

“He's a different type of kid, and what I mean by that is he's very mature,” Chamblin said of O'Connor. “The way he carries himself, he's always good around the guys in the locker room and off the field.”

Argos veteran receiver S.J. Green entered the game 20 yards shy of the 1,000 receiving yard mark. It didn't take him long to pass the milestone for the third year in a row and seventh time in his career.

On the second play of the game, Green hauled in a 15-yard pass and then caught another for 15 more yards on the play that preceded Edwards' touchdown.

This report by The Canadian Press was first published Oct. 26, 2019.