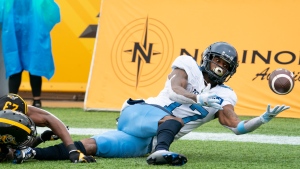 The CFL has handed out four fines, including two maximum ones to Toronto Argonauts receiver Markeith Ambles and Edmonton Elks defensive back Treston Decoud on Wednesday.

Ambles and Decoud were disciplined for their roles in a post-game altercation following the Argos' 28-23 win over the Elks on Oct. 15.

Montreal Alouettes defensive back Adarius Pickett was also fined for a hit on Ottawa Redblacks receiver Ryan Davis during Montreal's 34-30 victory on Oct. 14.

The league did not disclose the figures of the fines.