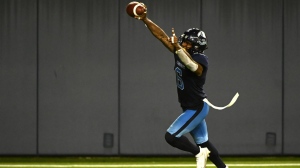 Toronto Argonauts defensive back Chris Edwards celebrates scoring a touchdown after intercepting a pass by the Hamilton Tiger-Cats during second half CFL football action in Toronto on Saturday, August 6, 2022. THE CANADIAN PRESS/Jon Blacker

TORONTO - He hasn't played offence since high school but Chris Edwards still knows what to do when he gets his hands on a football.

The Toronto Argonauts linebacker/defensive back has returned both of his interceptions this season for touchdowns. He has scored five TDs over his five-year CFL career, four coming in the last two seasons alone.

The 29-year-old native of Southfield, Mich., played on both sides of the ball (including quarterback) growing up and also returned kicks. He shifted to running back and receiver at Southfield High School before becoming a full-time defensive player upon enrolling at Idaho.

But the six-foot-two, 217-pound Edwards still relishes the opportunity to get into the end zone. He's the only player in the CFL this season to return multiple interceptions for TDs.

“I love touchdowns,” he said with a huge smile following Wednesday's practice. “There's no better feeling.”

Edwards and the Argos' defence have made getting into the end zone a habit this season. Toronto has scored seven defensive TDs -- five via interceptions -- to stand tied for the CFL lead with the Calgary Stampeders.

“That's the goal every time we touch the ball,” Edwards said. “That (defensive TD) helps the offence and can change the game.

“When you score on special teams or defence, the percentages go up for your team to win. It's a 14-point swing, then we're right back on the field and can do it again.”

Toronto also boasts one of the CFL's stingiest defences. The unit allows 20.8 offensive points per game, second only to Winnipeg (19.8).

The Argos are also tied with the Bombers for fewest offensive TDs allowed (27) and has forced 43 turnovers and 81 two-and-outs, both CFL highs. Toronto defensive back Jamal Peters has a league-best six interceptions, returning one for a TD.

But while Peters has bragging rights when it comes to interceptions, Edwards does have more TDs.

“There's definitely a friendly competition,” Edwards said. “I talk trash to them because I have the most touchdowns but (Peters) does have the most picks.”

Corey Mace, a former NFL/CFL defensive lineman, is in his first season as Toronto's defensive coordinator. Mace said while the Argos have set returns off turnovers, he credits his players for having a nose for the end zone.

“We try to have a designed plan for once we get the turnover and the guys have been working hard on that since camp,” Mace said. “But, really, you have to credit the players.

“Once they get the ball into their hands, some guys have a special talent to get it going. We've been fortunate enough to have a few guys take it back to the house and if we can continue that, that's always a plus.”

Added Edwards: “We do play an aggressive style of defence but I feel like it's the playmakers in the room right now. Our mentality, the brotherhood we've got, the friendly competition. That all just keeps us going.”

But Edwards, in his second season with Toronto, credits Mace for providing more structure to the Argos defence.

“We understand the details better so we're able to play faster,” he said. “That's what I'm excited about.”

Toronto (10-6) is atop the East Division ahead of the Montreal Alouettes (8-8). The two teams will end the regular season with a home-and-home series, starting Saturday at Molson Stadium.

The Argos need just one more victory to cement first for a second straight year. It would also secure Toronto home field for the division final on Nov. 13.

“We want the two wins, we don't want to lose a game,” Edwards said. “But if we get this one, we're a step closer to our goal.”

Montreal quarterback Trevor Harris is third in the CFL in passing yards (3,744) and has completed a solid 71.3 per cent of his passes. His favourite target has been Eugene Lewis, who's third overall in receiving with 85 catches for 1,231 yards and nine TDs.

The Alouettes are also ranked sixth in rushing (90.3 yards per game). But William Stanback, the '21 CFL rushing leader, recently returned to the lineup.

“A guy like (veteran receiver Jake Wieneke, who had 11 TD grabs last year) doesn't get talked about much but the last couple of years he's been a dude,” Mace said. “Their O-line is blocking well, you've got to stop the run and you have to stop Trevor and Gino (Lewis).

“Any team that can insert a Stanback into the lineup can cause problems for opposing defences. But hey, he plays for them, we play against him so our job is to stop him.”

This report by The Canadian Press was first published Oct. 18, 2022.